Nothing gets a guide at Trophy Mountain Outfitters more excited than being able to be part of a Wyoming Rocky Mountain Sheep hunt. I grew up in Wyoming sheep country and come from a family that has long been bitten by the sheep hunting bug. This is a true passion that runs deep in our family roots. In my opinion sheep hunting is the pinnacle of the hunting world. If you book a hunt with us you will more than likely have more than 1 guide to help out on the hunt as it is the goal of almost every guide to eventually be able to be part of a sheep hunt. I have been lucky enough to get my sheep hunting craze satisfied by guiding hunters year after year and the thrill of watching a client harvest such a coveted and magnificent trophy. It really is a privilege. My guides and I know what it takes to get a nice ram and we are committed and dedicated to putting in the time and effort of scouting and finding the best rams in each unit.

At Trophy Mountain Outfitters we put out an unmatched effort to provide each hunter great opportunities on Rocky Mountain Bighorn Sheep. We specifically focus our sheep hunts in areas 4 and 7. We know each of these areas from one end to the other and the best places to find good rams. One of our main wall tent wilderness hunting camps is located in the heart of area 7 sheep country. Because this is one of our main camps it provides us ample opportunities to watch and locate rams before the season and also throughout the fall. We spend our entire fall hunting in the center of area 7 and this country is home to us. This camp also gives us the ability to hunt unit 7 sheep from a comfortable wall tent camp. Or, we can go to a spike camp depending on where we have located the best rams in the unit. Sheep hunts in area 4 take place only from a remote spike camp we pack in and set up. Horses and mules are used to pack us along with our gear into the high mountain range we will be hunting.

The 2022 season was another great year of sheep hunting. We had two sheep hunters this year Barry and Tim who were both great guys and a blast to hunt with. They both were able to connect on two nice mature rams. The Wyoming Game and Fish department issued an additional 4 ram tags and added 16 ewe tags to area 7. The addition of tags was felt with the hunting pressure in the area. But, with our knowledge of the area, and having a great team of guides, we were able to locate rams and have a successful and fun sheep season. Area 7 does have some great sheep hunting and if you have the points to draw a license, we would like to help you with your sheep hunting adventure.

The 2021 sheep season for Trophy Mountain Outfitters was incredible.  We had 4 sheep hunters and were able to connect on four awesome rams.  All four of these rams would rival any of the big sheep we have taken over the years.   It was a fun and exciting season as we were able to locate big ram after big ram.  The stars definitely aligned for us this past year.  Although, we did have a great season overall, the sheep hunting was tough.  We had to work hard and have some luck on our side.  The area we hunt is a great unit and the opportunity is there for a good ram.

We have high hopes going into the 2022 season as we did see some nice rams that are still out on the mountain.  We had a few of these rams give us the slip and others were spotted after the season.   If you are close to drawing a sheep tag, feel free to give us a call.   Congratulations to our 2021 sheep hunters and thanks for your hard work and positive attitudes.  A huge shout out to the hard work and dedication of our guides and crew.  Without the team we have harvesting these big rams wouldn’t be possible.

Sheep hunting this past fall was as tough as I have seen in area 7. Not sure why, but the rams were hard to find and not in the usual places. We had to hunt hard and long to find mature rams. My opinion is with the hot and dry summer it had most of the rams in the timber. This was the only areas where the grass and feed was still lush and green. But who really knows why the hunting was tougher for sheep last year? I guess that is why they call it hunting. You never know how it will turn out. We are hoping for a better year of sheep hunting in 2021 and can’t wait to get back on the mountain. Sheep hunting in my opinion is the pinnacle of the hunting world and we will continue to give 110% to help our clients find good rams and have a fun hunt.

The sheep unit we hunt continues to produce top quality rams year after year. 2019 was no different and we were able to connect on 3 awesome rams. With lots of quality rams and our hunting camp that is located in the heart of sheep country, to date we are 100% success on all of our sheep hunters. The area we hunt isn’t as physically demanding as some of the other sheep units in the state, but it is still sheep hunting and a hunter needs to be in sheep shape if you plan to hunt this area. Hiking, horseback riding, being out in the elements, and being able to function at 10,000 ft. elevation are crucial to harvesting a ram in the high country. If you are considering applying for a sheep tag give us a call.

In 2019 with over 20 sheep points I decided to cash in and draw a sheep tag in area 3. I had several people ask me why I didn’t apply for area 7 as I pretty much live in and hunt the area, and would more than likely harvest a trophy ram without near the effort? My reason was I wanted an adventure of a lifetime. Area 7 is where I outfit and guide. It’s like my office, which is the greatest office in the world. I wanted to hunt an area I had never been in before; I wanted some rough, remote, and rugged country. Area 3 was all of that and didn’t disappoint with adventure, although the ram numbers were very low compared to what I’m used to seeing in areas 7 and 4. I was able to spend a few weeks scouting and learning the area before the season. With advice from some fellow outfitters and friends that were familiar with the unit I started my adventure. After guiding for 27 years and seeing several hunters base their hunts off of the size of the animal they took I wasn’t going to pressure myself with measuring my hunt over a tape measure and number of inches although I set out to take an old mature ram if I couldn’t find one I was prepared to eat my tag and treasure the experiences. Opening week of Sept 1st I hunted 10 days and wasn’t able to find the ram that I was willing to end my adventure for. I had waited and dreamed of this for over 20 years and I was going to enjoy every minute no matter what the hunting was like this was an adventure and my hunt. After going back three times throughout the season trying to find a “shooter” ram I had racked up 22 days of hunting and nearly 2 weeks of pre-season scouting. With the season coming to a close on the last week of the season I was able to be hunting with a good friend of mine and we found a nice ram. After 22 days and several awesome experiences that I will treasure for a lifetime I took a 9-year old ram. After spotting the ram he had moved from where he was bedded and while we were putting on a stalk we jumped him in the trees. I made an off hand shot at 32 yards. My 2019 sheep tag was filled and what an adventure.

The unit we sheep hunt in was out of the ordinary in 2018. A hot dry summer had burnt up most of the forage in the high open basins where the rams are usually located. With lots of green lush feed in the dark timber areas the rams made a transition down into the thick trees. Adjusting our sheep hunting tactics we were able to have a successful fall. We harvested 1 ram that was 11 years old. Another client achieved a true accomplishment harvesting a ram at the age of 86. We were fortunate enough to have 3 awesome sheep hunting clients last fall and connected on 3 nice rams. Sheep numbers are doing well in our area and ram numbers are high. We see rams on almost a daily basis during the hunt. There is also an opportunity to take home a true Wyoming trophy quality ram. Sheep hunting is very physically demanding and if you are planning on going after a 160 – 170 plus inch ram you will need to be in SHEEP SHAPE! Congratulations to the sheep hunters this past fall and thank you for allowing us to be part of such a special hunt.

Sheep hunting in area 7 continues to improve each year. Seven is a great area that holds some of the premier sheep hunting in the state. We were lucky enough to be able to take 3 sheep hunters last fall and connect on three nice rams. A ram we named “Watusi” was as lucky as a ram can get and gave us the slip on two occasions. We hope he made the winter. He has given us something to talk about and plan for trying to out-smart him next season. Congratulations to Sy, Dave, and Larry who all went home with awesome rams. Larry, after 17 years of applying and at the young age of 75, was able to fulfill his sheep quest and got his ram near the last day of the season. Thanks guys.

What are you hunting for? 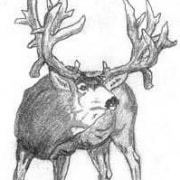 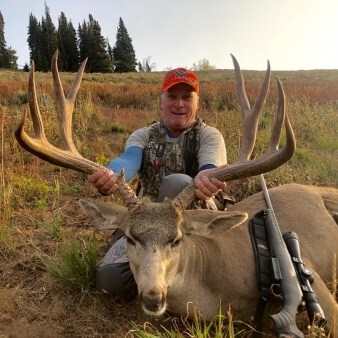 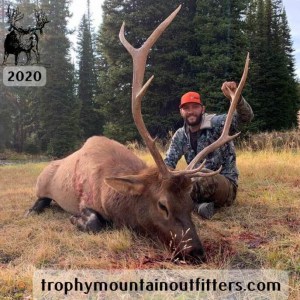 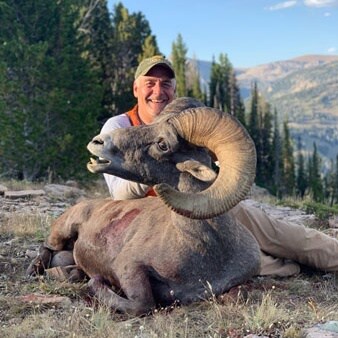 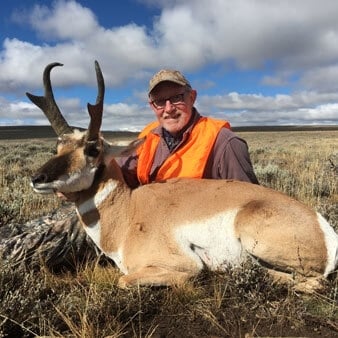 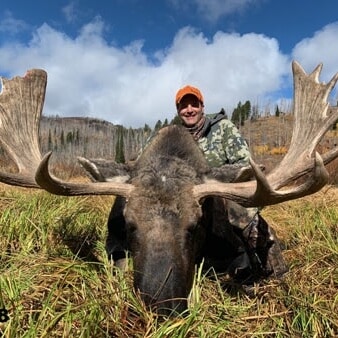 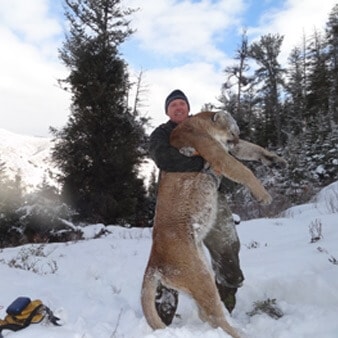 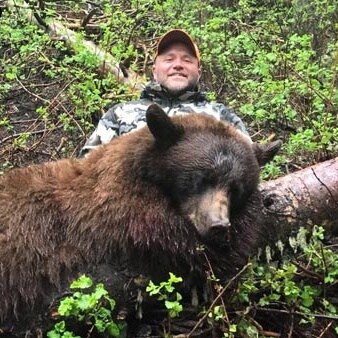 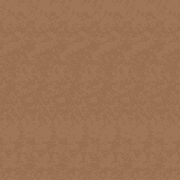 RETURN TO TOP OF PAGE
Scroll to top